Hallo, Pooh, you're just in time for a little smackerel of something 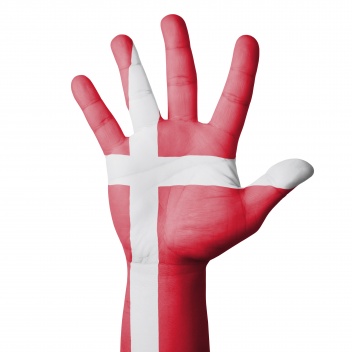 The Focus of This Lesson is the History of Danish

Danish is the official language of Denmark as well as the Faroe Islands and is spoken by approximately six million people, of which 5.6 million people are native speakers. It is also the minority language on Greenland, Iceland, and northern Germany. Danish belongs to the Indo-European language family, but is more specifically referred to as a Northern Germanic language. Danish, together with Swedish and Norwegian, is considered as Mainland Scandinavian due to their mutual intelligibility, meaning that speakers of at least one of the three languages are able to understand all three more or less.

The long history of Danish can be traced all the way back to the 8th century where Proto-Norse, the common Germanic language of Scandinavia at that time, had evolved into Old Norse which was then further divided into two similar dialects: Old East Norse and Old West Norse, which was only separated by diphthong changes. In eastern Denmark, the former was called Runic Danish and written with an alphabet which had only sixteen letters or runes, the Younger Futhark alphabet. Some runes, such as the rune for the vowel u and the rune for i, were used for a range of phonemes as the number of runes were evidently quite limited. In Sweden, Old East Norse was called Runic Swedish, but the two dialects were basically the same until the 12th century. However, due to the widespread travels of the Vikings for trade, warfare, exploration etc. during the Viking Era, Old East Norse was also once spoken in the northeast counties of England, as they were colonized by Danish Vikings. Many words still used in the English language today, in fact, derive from Old East Norse. For example, "gate" (gade) meaning "street," "egg" (æg), and "knife" (kniv). In the Late Middle Ages, the runes had completely been replaced by the Latin letters brought along with the introduction of Christianity. At this point, Danish was also highly influenced by Low German due to immigrating merchants and craftsmen from northern Germany, resulting in Germans joining the chancery making Low German the actual mother tongue of many Danish kings during the Middle Ages. Today, however, the basic vocabulary of the Danish language is still Nordic, but since the 1950s, English loanwords have made their way into the language used not only in a business context, but also on a daily basis, and are continuing to expand the Danish vocabulary.

In general, the Danish dialects can be divided into three distinct main groups: Insular Danish, Jutlandic, and the Bornholmsk dialect (Bornholmian). These, however, can be further subdivided into about thirty dialects. The traditional Danish dialects have gradually been replaced by a regional pronunciation of Standard Danish. Standard Danish or Rigsdansk is the common writing system, that was introduced around 1500 at the royal court and the chancery. Since these were in Copenhagen it was natural that it became based on some dialects that were spoken in and around the capital. And today this is the standard has to how we write Danish even though the spoken dialects in and around Copenhagen are distinct dialects in themselves named after areas of Copenhagen, and not Rigsdansk. Even the Queen speaks in a dialect.

Denmark is located south of Norway, north of the German border, and southwest of Sweden to which it is connected with the Øresund Bridge. Denmark, officially the Kingdom of Denmark, has two additional overseas constituent countries, Greenland and the Faroe Islands located in the North Atlantic, and is surrounded by the Baltic Sea, the Kattegat, Skagerrak, and the North Sea, giving Denmark a 7,314 km tidal shoreline in total. The country consists of the peninsula of Jutland and 443 named islands, among which Funen and Zealand are the largest. With a fairly humble population under 5.6 million people, the largest cities, which are Copenhagen on Zealand, Aarhus in Jutland, and Odense on Funen all connected with bridges, are inhabited by fewer than 200,000 people, making Denmark quite small compared to its neighbors.

Denmark has four seasons and large seasonal variations in daylight due to its location. The climate is temperate, with cold winters, mild springs, slightly warmer summers, and wet autumns. It is possible, though rare, to experience snow in April and hot and sunny weather in October. The country is flat and the highest point, Møllehøj, is only at 170.86 metres. Therefore, Denmark has become one of the world's leaders in wind power technology, as strong winds blow freely due to the flatness of the country. In addition, Denmark is characterized by sandy coasts and woodlands, but is also highly urbanized, such as the largest cities mentioned above. Finally, the Kingdom of Denmark is a constitutional monarchy, which means that actual royal power is limited and the head of government, the prime minister, is the one exercising executive authority together with other cabinet ministers.

III. Where Danish is Spoken

Danish is mainly spoken by around 5.6 million people in Denmark, but is also spoken in Greenland, the Faroe Islands, Iceland, and northern Germany. It is also the official language in the European Union Nordic Council and is spoken in Danish communities in the US, Canada, and Argentina.

The Danish alphabet consists of Latin letters and is similar to the English one with the exceptions of the vowel letters æ, ø, and å at the very end of the alphabet. They have replaced the digraphs ae, oe, and aa, but the latter aa can still be found in some personal or geographical names today without any change in pronunciation. The digraphs can also be used if æ, ø, and å are not available, for example, on computer keyboards.

In Danish, at least seventeen different vowel qualities and twenty-one consonants can be distinguished in distinct pronunciation, representing ten distinctive vowel phonemes and fifteen consonant phonemes. These phonemes differ further in allophones depending on length, conjunction, occurrence, combination and so on. In addition, the prosody of Danish does not have phonetic pitch like Swedish and Norwegian, but does have stress, which is phonetic and distinguishes words. The stød, a suprasegmental feature occasionally realized as a full glottal stop, is also phonetic and distinguishes words. While there are main rules for the position of the stress, only some main rules exist when it comes to predicting whether or not the stød is present. Finally, the Danish pronunciation of the letter r also differs from Swedish and Norwegian, as it is not trilled, making it sound a bit like the German r.

V. Why it is Important: The Top Five Reasons to Learn this Language Are...

1. Learning Danish is fun! In many cases, when the stress is not positioned correctly or the stød is not present when it is supposed to, or the other way around, the word you are trying to pronounce will have a completely different meaning than the one you actually want to communicate. It is also a great way of making people laugh when they hear you speak, as to many people Danish often sounds like you are trying to speak with a hot potato in your mouth.

2. Denmark is one of the world's best welfare societies. Danish welfare is handled by the state and managed by municipalities, regions, and private operators. The essence is equal access for all to public offerings, services, and benefits, both tangible and intangible. These include social security, tax-financed education, public childcare, disease treatment, subsidies etc. With an average of almost 50%, Denmark has one of the world's highest tax levels—sometimes the highest—which is a necessity to maintain good welfare. Yet, Denmark and its welfare society remains very attractive to many people worldwide, so if you dream of living in Denmark one day, learning Danish will definitely give you an advantage, as Danes love when people have taken the time to learn the Danish language spoken by such few worldwide compared to English.

3. Denmark is a beautiful country! Rich in natural and cultural attractions, Denmark is becoming one of the must-see tourist destinations in the world. Learning Danish gives you more opportunities to get a deeper understanding of this beautiful and interesting country and its people.

5. You don't need to study complicated characters! The Danish alphabet is exactly the same as the English alphabet with the exceptions of the three vowel letters æ, ø, and å. So it's very convenient for English speakers to read and write, and make quick progress.

Thank you for posting.

The 'g' here is silent and therefore not pronounced.

This means we go straight to 'er' which is pronounced like the -er present tense ending. For example, "siger" ("says").

Lastly, 'rak' is pronounced like the 'rak' in the Danish word "raket" ("rocket"). The vowel sound is short.

Hope this was helpful, but please don't hesitate to ask if you have any further questions.

can you help me pronouncing the word?

Thank you for commenting.

We are thrilled to know you are excited to learn Danish.

Let us know if you have any questions.

We'll be glad to help you.

I am so excited to learn Danish :smile:

Thank you for commenting.

If you have any questions, please let us know.

We hope you will enjoy learning Danish with us.

If you have any questions, please let us know.

Wishing you the best of luck!

Thank you for posting! :smile:

Let us know if you have any question.

I'm actually German and am fluent in English. I'm sort of a multi language person, because I love to learn new languages and I can do most accents very well. Now that I wanted to try something new, I searched for some countries with cool languages and I was interested in the Scandinavian countries and their languages immediately. Especially Denmark. Then I began to study some Danish already until I found this website and thought "why not". So, here I am. :thumbsup: